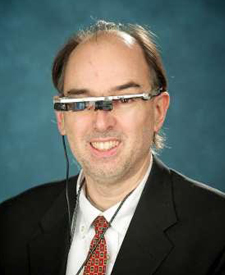 Dr. Mann is currently a professor in the Faculty of Applied Science and Engineering and the Faculty of Arts and Sciences at University of Toronto. During his PhD at MIT, he was one of the founding members of the Wearable Computers group in the Media Lab. He is the inventor of the hydraulophone, won first place in the Coram International Sustainable Design Award for his interactive water feature, and is the recipient of the 2004 Leonardo Award for Excellence.

He has invented numerous “wearable computers” and other wireless technologies. Such computer vision systems that are built into eyeglasses can be used to assist the visually impaired, or those suffering from visual memory disability. Dr. Mann founded InteraXon, a Canadian company that is currently commercializing the cyborg technology developed by Dr. Mann. Dr. Mann has written more than 200 research papers, books, and patent publications. His work has been shown in numerous galleries and museums around the world.